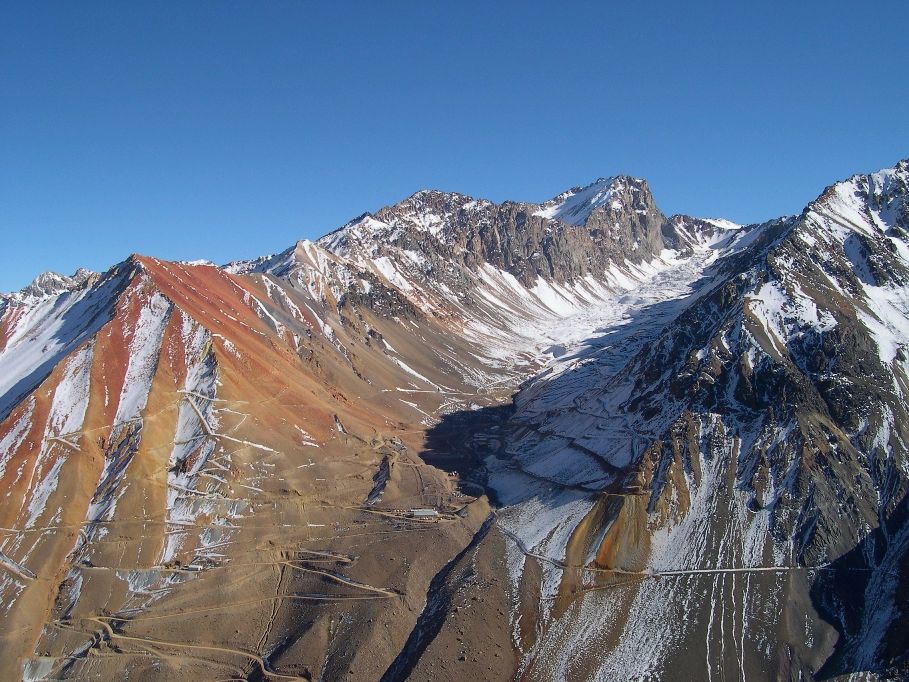 Since 1982, the Pimenton alteration zone has been explored by Cominco, Anglo American, Newmont, Mount Isa Mines, TVX, and South American Gold and Copper Company. Many of the geologists of these companies, as well as others, have regarded the Pimenton alteration zone as the surface expression of a deep-seated porphyry copper system. The narrow high grade gold veins which occur over a minimum 3 by 3 km area are regarded as forming a zone, or overlying cap, above possible buried porphyry copper mineralization.The discovery of a large tourmaline breccia pipe lends credence to geologists who have likened Pimenton to the geological upper part of the Andina and Disputada de Los Condes porphyry copper mines which lie 70 kilometers to the south of Pimenton. Both these mines have prominent copper bearing tourmaline breccia pipes, at similar topographic elevations, together with other porphyry copper mineralization, as does the Antofagasta Plc Pelambres mine that lies 90 km to the north of Pimenton.

The new tourmaline breccia pipe is located on the northeastern edge of the 4 by 5 km Pimenton alteration zone. The pipe is 3 kilometers north northeast of the mine camp on the eastern side of the Portillo Hondo valley that parallels the Pimenton valley, lying immediately to the west where all previous mining and exploration work has been concentrated.The pipe is topographically prominent on account of its strong silicification. Once recognized, it is easy to distinguish and establish likely limits in the field and on photographs. (see attached air photo and view) The pipe strikes northeast for 1,500 meters, starting at an elevation of 3,700 meters and reaching towards the northeast to 4,500 meters. Width is 700 meters with a possible buried extension towards the north. The northeastern half of the breccia pipe is in extremely rugged ground and surface sampling would be very difficult. The southwestern half of the pipe while also in rugged ground is more accessible.The pipe is near vertical and cuts northwesterly striking andesites, agglomerates and tuffs that dip steeply towards the northeast. There is extremely strong northeasterly striking, closely spaced, near vertical breaking which influenced the pipes emplacement. Observed breccia fragments vary from plus 20 centimeters to microscopic in size, and from angular to subrounded {see photograph}. It appears the pipe is made up of a silicified and sericitized quartz porphyry intrusive that has been brecciated, tourmalinized and mineralized with coarse to very finely disseminated chalcopyrite and pyrite. 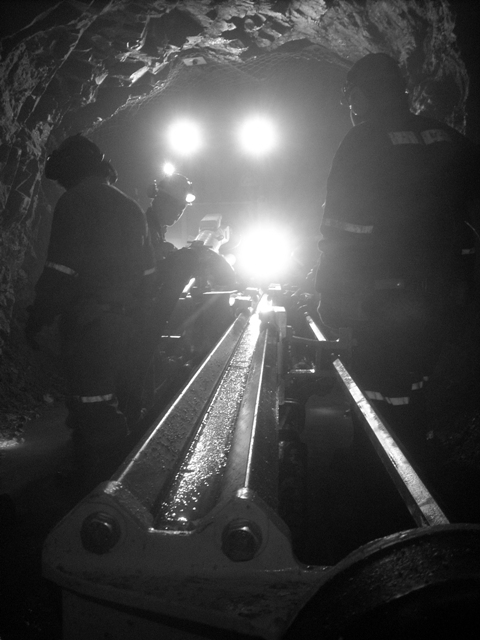 The chalcopyrite shows a strong affinity for the tourmaline, but also occurs disseminated in the quartz porphyry. The tourmaline makes up much of the matrix, follows closely spaced fractures, and also occurs very finely disseminated throughout the quartz porphyry. The remnant sulphides in the exposed cliff faces and float show leaching has been strong, but will be shallow. There is little chance of significant secondary enrichment of copper because of the limited leaching. The above description can be applied to the southwestern half of the pipe from 3,700 meters up to 4,000 meters. The other half up to 4,500 meters, as observed through binoculars, appears to be the same, but the presence or absence of chalcopyrite cannot be confirmed at present.As can be seen in the accompanying claim map, the southern part of the pipe is within SAGC’s Pimenton claim block.The northern part belongs to CODELCO.The extreme topography will make for slow and costly surface fieldwork, and leaching will affect the reliability of any surface sampling. Percussion drilling is an effective method to get initial results. Fortunately road access within SAGC’s ground, to both sides of the pipe as well as it’s southwestern end and center, will be over talus with very little if any rock blasting required. The siting of the first percussion holes will be favored by two aspects. First, the entire southern limit corresponds to a cliff at least 30 meters high. This can be drilled into with drill holes inclined at 60 degrees to the horizontal, which will have very little overburden. Second, the center of the pipe has been eroded by a glacial cirque. This has left a semicircular amphitheater within the breccia pipe. (see photo) This means drill holes around the amphitheater can be collared in solid rock. Careful systematic surface visual examination in these two areas is expected to find early drill targets. Subsequent drilling will depend on results. If an economic body or bodies can be outlined within the breccia pipe by the early percussion drilling, a suitably detailed diamond drill program can follow to define reserves. Pimenton can experience light to heavy snow conditions during the Chilean winter season from May to October. The company’s current plans are to immediately construct 10 km of road to provide access to the breccia pipe. This will be followed by further exploration of the breccia pipe, as mentioned above, and the siting of drill holes. If light winter conditions prevail, drilling could progress during the winter months.

SAGC has an Atlas Copco Mustang down the hole hammer, high pressure, drill rig and has shown this rig has the capacity to reach 200 meter depths extremely rapidly, and at a very modest cost.Approximately 50% of the altered area at Pimenton corresponds to valleys masked by fill that can be evaluated by geophysics and subsequent drilling. There are four other tourmaline breccia pipes which need to be investigated to depth. On the Pimenton ridge, there are zones of close fracturing where there are strong surface geochemical gold anomalies striking northeast which point directly at the newly recognized breccia pipe. These carry trace copper and may overlie blind tourmaline breccia pipes that have not stoped their way up to the ridge, or for that matter, they may overlie disseminated copper mineralization. This report was prepared by Dr. David Thomson, Executive Vice President and Director of Exploration of SAGC and a “qualified person” for the purpose of National Instrument 43-101.